It would definitely be good to see 2.0 come to reality. And for us to use what we have learned for the benefit of us all. It's even better when we can incorporate what community members share with us.

One of our core promises was to provide all users with a path to upgrade. It was the foundation for the development of the deprecated messages in debug. I have yet to comprehend what it will take to make a module compatible with 2.0, or if there is an upgrade from 1.3/1.4/1.5 to 2.x. Even with that commitment, 1.2 > 1.3 was a 'start over' for some webmasters (including me). There were modules that didn't make the transition and replacements need to be found (still). 1.3 > 1.4 dropped more modules because they weren't updated by their developers and they haven't been adopted by anyone else.

As a founder and one of the developers I take responsibility for this. I am also a stakeholder and have sites that rely on what we produce. Don't get me wrong - what's been happening with 2.0 is going to be a great thing. I don't have the skills to have done any of it. I also lack the ability to explain it.

I've gone off topic for this thread - I apologize. I'll move to another topic where we can continue the conversation.

I think it's safe to say that the ticket is gone on the mean time. It will be better to create a new one for that.

I would prefer to focus this change first for 2.0,eventually later it can be back ported to 1.5.x,but it is important to give precedence to the 2.0 branch now.

Search is an area where we can improve a lot, for example by making it easy on a core level to use external search providers as well, next to the standard search

I was looking for something else and came across this post. Things have moved around a bit and I couldn't find a branch or a ticket about this. We still can benefit from this approach. I'll add a new issue in github, unless someone can find the original

That's because I just submitted it before the post

We've finished a few more shops at work in recent months, including some Shopify ones. What we learned there was that Shopify is a very capable solution, provided you can adapt your requirements to the way Shopify works. We sadly have had a customer that insisted on using Shopify, but came with loads of requirements for which we needed to force shopify to work in ways it wasn't really designed for. In the end, we got it to work, but it would have cost that particular customer a lot less if he had gone for a Shopware (or magento2) solution because that kind of platforms give you more freedom if you need it.

There was a paypal integration with oledrion at the time, but I don't think it will still work without change.

We're a bit light on tradition in our family, compared to you

We've moved across the country (150 km, which is almost the other side of the country here in Belgium) from our family, so it takes some organising to keep everybody happy, and make sure we have some time for ourselves as well. Schools have Christmas holidays for 2 weeks each year, so we have to organise that period for the kids as well, in combination with our limited number of vacation days.

Normally, we go to my parents for Christmas Eve, and there we open all the gifts under the christmas tree we have for each other. You won't be surprised when I say that the vast majority is for the girls

We're flexible in the timing.

Because we arrived around noon on christmas eve this year, we opened the presents then, taking into account we would leave the country 2 days later. That way, the girls had as much time to play with their newly received toys as possible.

These last few years, my parents-in-law have chosen to spend the Christmas and new year period in their appartment in La Caleta, on the gorgeous sunny island of Tenerife, and they invite us to come over for a holiday and see the fireworks. These last few years we were lucky that christmas came at the very beginning of the holidays, so we could spend almost 2 weeks there. I dare almost say this has instantly become a new family tradition. And believe it or not : the first day after we get here, we go to get a haircut, every time

Because we are always guests somewhere else, we try to suggest food that is easy to prepare, and try to help as much in the organising and the preparation the day itself. This year, on Christmas day, the journey was more important than the destination :  grandpa making pizza from scratch with his granddaughters. Priceless to see the amount of fun they had, and the result was very tasty as well.

Climate wise, it's been since my teens that I can remember a white christmas. The last time we had really multiple days of snow was more than 10 years ago. This year, it even looks like we will break the record of the highest temperature ever in Belgium on the last day of the year : 16° Celcius - a nice spring day.

The first saturday of the year, the Mayor of Mechelen invites all his citizens to come together on the market plaza in the center of town, and have free drinks and free snacks to celebrate the new year. You can imagine it's a fun way to greet people also living in Mechelen you see only a few times a year, and it's very popular.

Sure, no problem. I hadn't seen your pr before.

@fiammybe - would you start with the pull request I just added? I applied the source formatting in our coding standards before making any other changes. It's so much simpler than trying to review that and the code changes that come later.

Hi Steve, thank you for this first batch of tests. I will already make the changes you mention on github. I'm currently focussing on getting ImpressCMS 1.5.0 ready for PHP8 so that has my focus at the moment, but getting oledrion running on ImpressCMS 1.5 would be nice indeed.

You encounter issues because the comments were written in French, and they use these darn accents

I think I will translate them.

I did start going through testing Oledrion on newer versions of ImpressCMS. Here are the first few things I've found

If someone else would like to have a look at this, I've got a couple of other modules I'm focusing on at the moment.

Our current payments processor does tax calculation based on the delivery address. The challenge is creating the shop to match up with the product list and get the transaction completed.

I haven't looked deeply at oledrion, knowing the link from the shop to the payments side is going to be the trick, along with getting tax calculated properly.

After exploring a bit more, I am leaning towards Shopify and creating a shop on a subdomain to preserve all the SEO juice we've built up and to ease the full entry to online shop and pay without our interaction.

Christmas, for us, comes at the darkest and coldest time of year, and we try to bring light and warmth through a variety of activities. A lot of our traditions are family traditions from several families and generations. While we live in the US, we trace our heritage to Europe and Scandinavia, melding a lot of old cultures with new creativity.

For us, Christmas starts on with Christmas Eve on December 24 (after dark) and extends to January 6 (Epiphany). We do decorate (for light and warmth) - I usually get a fresh cut evergreen and bring it in a couple of weeks before Christmas Eve. It stays up until January 6.

We definitely gather as many as we can - travel conditions and health being the main separators. Attending Christmas Eve church service is also part of my tradition. This year, weather kept us at home.

Food - just lots of it. The items that get the most attention are the cookies (Kekse, koekjes, småkakor, biscuits). There are some recipes that are difficult to reproduce the way we remember them. Even though they're German (springerle), they're not that common among all people of German ancestry. My great-aunt's recipe is very descriptive, just not a lot of details. "Start early in the morning ... Before noon ... After dinner ...". 1 of the ingredients is a bit difficult to find in the US (baking ammonia), so I don't attempt them often.

The children get gifts, the adults exchange gifts - either by drawing a name beforehand, or with a random drawing the day we gather. We also send cards and letters to friends and family.

Music is also an integral part of Christmas - music, hymns, carols, anthems, oratorios, and cantatas specifically for this season. I've got more playlists, music CDs, and albums for Christmas than any other genre.

Part of my heritage is Dutch - the surnames are de Bruyn and Kops, as well as the combined de Bruyn Kops. Plus, there's some Bohemian/Czech (Smetana) in my blood. I would love to hear your traditions for this time of year!

Thank you, David - Merry Christmas to you, too! 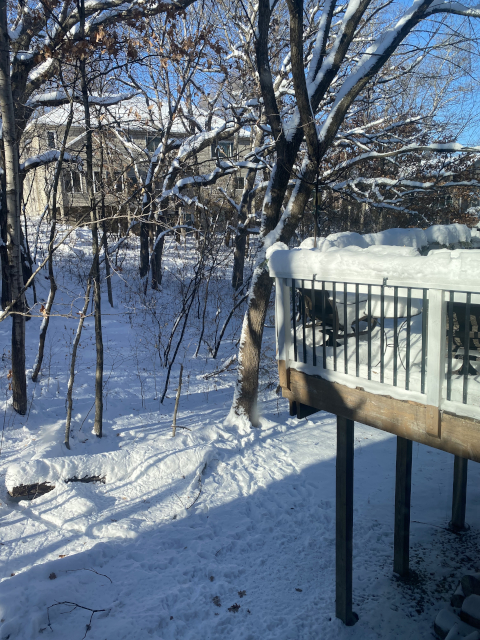 I would like to wish everyone a very merry Christmas!

Europe is profiting from quite warm temperatures for the time of year. It's 10 degrees centigrade, which is 20 more than a week ago. But I get the news that the holiday period in the USA is not starting easily with snow storms and arctic temperatures foreseen in the near future. And I don't know how things are going in Asia on that account.

I hope everyone gets to have lots of quality time with loved ones, because that is what this period stands for, no matter your religion or beliefs.

And after that: countdown to the new year, which will be full of surprises as always.

How do you plan to spend this period? I'm curious into what other cultures and countries do around the turn of the year.

I can understand the confusion : As a matter of fact, everything works with PHP 7.4, but I can't get it to install on PHP8 because that version is more strict on declaration of constants, and because my PHP8.0 debug setup is totally broken

So I may have accidentally already pushed the 'final' label and got confronted with the PHP8.0 issues after that.

I see 1.5.0 is still described as Beta in include/version.php, though it's status is set to Final. Last release on GitHub was 1.5.0 RC.

I submitted a pull request for these tests and removal of the folders during an upgrade if appropriate. Warnings show if either editor is present and another warning if they are set as the default editor for any module or the core.

Hi @Steve, I was wondering if your payment provider does offer tax calculations? My current knowledge only covers services that are active in Western Europe at the moment, so I don't know about US-based payment or shipping enablers.

Have you had the chance to review oledrion? I know it's old, so probably a refactoring is really necessary, but would it work for you in its current state?

Should we wedge this in and apply the same methodology for TinyMCE?