I overwrote the jQuery with the old version, that fixed it.

According to the latest package.json for Bootstrap 4.4.1, the jQuery version needs to be at least 1.9.1 and less than 3

I think we introduced a new bug by updating to ImpressCMS 1.4 - the newer version of jQuery is not compatible with the version of Bootstrap used in the theme. The result is the navigation menu does not work for mobile devices, or even when you desktop browser emulates a mobile device.

Not that I was aware of. We upgraded to 1.4 afrond the time that the issues started appearing. The standard should now be ckeditor, no DHTML is in use atm.

Was there a change in groups and using the Rich text editors in the forum? If the DHTML editor was the standard, then the HTML settings would not have mattered.

Looks like it is fixed now. And my temporary issue with the forum that stopped me from posting has gone as well.

Thank you for this fix, I didn't know of this option having changed though. Perhaps a wrong edition somewhere.

We recently discovered some forum posts were displaying fine, while others were displaying the HTML tags instead of using them as markup. On further investigation, I found the individual forums were not all configured identically and some had HTML disallowed, even though the default editor is a rich-text editor.

I did update most of the top-level forums. If you find a forum that hasn't been updated and your post is not rendered properly, please let us know. Some of the old forums aren't active much, and some are not relevant because of our site consolidation (the addons site forum and the wiki forum, for example)

Now we may have something - each forum has its own setting for allowing HTML. This one didn't allow, until now.

From a new post in an old topic - https://www.impresscms.org/modules/iforum/viewtopic.php?post_id=50656#forumpost50656

Wondering about the options below

At this point, the default is to allow all comments if the module has comments (in icms_version.php). Probably since the base assumption is that ImpressCMS and predecessor were community sites and that would be the most common choice.

Also, all notifications defined in icms_version.php will be enabled by default.

Neither of these are reading anything from the module at the time of install.

However - you could override those options after the module is installed with the install function for the module, which is called at the very end of the process.

and also set default permission of module when installing the module

is this possible? any example i can refer to ?

As a side note, this thread does not show paragraph tags when I post something new. Strange

Those issues are the same ones that I encountered during my tests. After that, I was investigating webpack, and there you can include files with a specific directive, and it tells webpack to make it a relative path.

Perhaps this kind of functionality should be left to the front-end developers and not taken on by the CMS?

A very good question. And it looks like it is only posts that have been made after the migration to ImpressCMS 1.4.0.

Why are the html tags showing in the rendered posts, now? 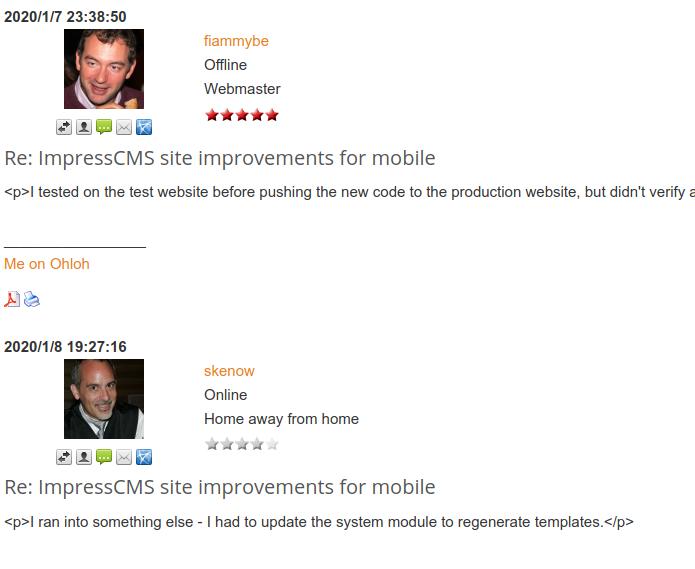 There are minify and combine functions in the core - and currently left unused. Mostly because the resulting file was placed in the cache/ folder and at least one of the js and css files had some specific paths that didn't work when the file was in a different location.

I found the locations in the header file where all the different files were loaded, and I included a switch statement so that I can switch the way includes are done by simply defining a boolean in the theme. When the boolean is true, I include a file 'combined.js' and 'combined.css', which are combined and minified versions of the different javascript and CSS files that are included at the moment. Whent he boolean is false, the old behaviour is still there.

This reduces considerably the loading time (first time at least) of a page. I still have some small issues with the minifying, but I think I have identified the problem.

I ran into something else - I had to update the system module to regenerate templates.